Today is a date with a Life Lesson number of 33

This stab spree in Sydney, AU that began at the CBD Hotel was allegedly executed by a man named Mert Nay

Today’s date is written 13/8 in Australia. That’s the Reverse value of stab spree

13 is another major ritualistic number in addition to 33. This stabbing on the 13th was carried out by a man named Nay

In English Extended, the name Mert Nay shares a 186 alignment with Sydney, AU. This number is also found in the same cipher with the words conspiracy and false flag 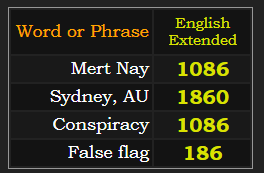 A major part of this story is that he was held under citizen’s arrest, which hilariously has the same gematria as Mert Nay

False flags are aligned with eclipses.

This event occurred 42 days after the 2019 total solar eclipse:

The Mayor of Sydney, Clover Moore, was 42 weeks after her birthday yesterday:

If we instead measure to the next total solar eclipse, we find it’s 1 year, 4 months, and 1 day away: 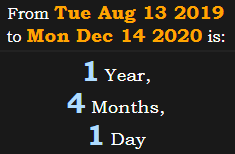 Sydney’s Mayor also has gematria of 141

The 2020 eclipse is exactly 70 weeks after the attack…it’s also 70 days before Clover Moore’s birthday:

Total eclipse and stabbing spree both sum to 137 Ordinal:

Queen Elizabeth is the monarch of Australia. She is 114 days after her birthday: