Today is August 3rd, written internationally as 3/8, ideal for a shooting at a mall in El Paso, Texas

It’s 38 days after the anniversary of the Mayor of El Paso, Dee Margo, taking office:

Today also has a Life Lesson number of 23

He shot up a Walmart

Reports are that at least 19 are dead, syncing up with the name of the suspect:

The shooting falls 244 weeks before a total solar eclipse that passes right near El Paso:

That eclipse that passes near El Paso, Texas falls a span of 1711 days after the shooting:

Both the city and state are ripe for a ritual like this.

This shooting happened a span of 33 days after this year’s total solar eclipse:

It’s 32 days without the end date:

The shooter’s name is Patrick

Jesus died on the cross under an eclipse at age 33. The shooter’s last name is Crusius, which appears it may have etymology roots in the word cross, but I’m unable to find a reliable source to confirm this.

As I mentioned in my post about this past week’s shooting at another Walmart in Southaven, Mississippi, Walmart was founded on July 2nd, the date of this year’s eclipse. They turned 57 years old this year, which is the Ordinal gematria of Moon.

As I just mentioned yesterday, 33 is connected to 226, which is the gematria of El Paso

Today is also a span of 71 weeks, 3 days before the next total eclipse 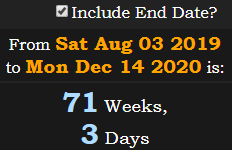 The Governor is Gregory Wayne Abbott