Last night, Lil Wayne paused his show to announce he wasn’t happy with the tour. He said that he might do one more song before quitting, then left the stage after performing for only about 15 minutes. He has since stated that he will continue the tour.

Why this strange news story in the headlines? Yesterday, July eleventh, had Full numerology of 57

The date July eleventh also has Jewish gematria of 2103

The news made headlines today, a date with Standard numerology of 38

The show took place on the 38th parallel. He was born on a date with 38 numerology:

Lil Wayne was 2 months, 16 days before his birthday, syncing up with his real name’s Ordinal gematria:

The only number to sum to 99 in the alphabetic order is the ritualistic number 13. This show was the 13th day of the tour:

The show was in Bristow, Virginia on July 11th, written 11/7 internationally.

This means the tour has another 67 days to go, or 68 with the end date included:

Why are these two acts even paired up in the first place? You have to appreciate how Lil Wayne, who was born in 1982, matches the gematria of the number 182

In Ordinal, adding the groups’ gematria sums to 331

The date of the concert had 19 numerology: 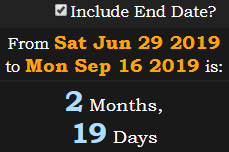 The number 1919 is significant to the eclipse code, as there are of course 19 years in the Metonic cycle, but it’s also the gematria of 1331, the ultimate eclipse number.

Lil Wayne walked out of his show on the 192nd day of the year:

The official name of the tour has gematria of both 129 and 1962, which should be taken as further evidence that rearrangements and mirrored numbers are also significant.

Notice how Lil Wayne has birth numerology of 118 and 137. The two frontmen of Blink 182 are Mark Hoppus and Matt Skiba, who were 118 and 137 days after their birthdays, respectively:

Rappers are commonly offed by the eclipse crucifixion code, but these types of news stories break by the same numbers as well.

The tour began on a date with Full numerology of 74

His name may be Lil Wayne, but we know this is short for Little Wayne. It should be worth mentioning that Little Wayne has the same gematria as Jesus Christ:

Lil Wayne was born on September 27th, which is the same date as the establishment of the Society of Jesus.

If you combine the 1 and the 3 above, you end up with something similar to the number 895. Jesus became a ritual human sacrifice following his betrayal by Judas at the age of 33

In the Bible, Jesus yells for ELI during the crucifixion:

ELI turned upside-down is the number 173

This incident occurred on the date leaving 173 days in the year:

It was 17 months, 3 days before the next total solar eclipse: 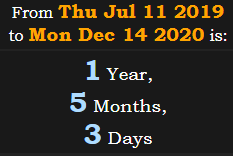