July 9th can also be written 9/7. In the year ’97, the film Men in Black, which Torn was perhaps best-known for, was released on July 2nd, which was exactly 22 years before this year’s total solar eclipse

Rip Torn also matches July ninth in 3 of the 4 base methods:

That date, July 10th, is written 10/7 in most parts of the world. Torn died 107 days after the anniversary of the death of Gary Shandling, who was the star of the Larry Sanders Show, which Torn was also well-known for.

Torn’s death on the ninth of July in Lakeville, and the date news broke, both fell 154 days after his birthday: 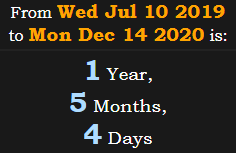 154 is 22×7, and of course 227 is a highly-ritualistic number that has to do with the mathematics of the circle. He died exactly 22 years, 7 days after the release of Men in Black:

His death fell 1403 weeks, 3 days after the debut of The Larry Sanders Show:

Torn’s death in Lakeville, Connecticut, was exactly 21 months, 6 days after his birthday:

A couple more things about him dying at 88 years old…his full name (w/ nickname) has the same gematria:

News of his death broke on the date leaving 174 days on the calendar:

That date was also 17 months, 4 days before the next total solar eclipse:

We talked about how his death was connected to both Men in Black and The Larry Sanders Show. Another movie I remembered Rip Torn from was DodgeBall: A True Underdog Story. I suppose this is relevant, particularly because he dies in the film after a large sign falls on him.

“DodgeBall” was released on the 170th day of a leap year:

His death fell on a date with 55 numerology:

In the film, he plays Patches O’Houlihan, the coach of Average Joe’s, captained by Vince Vaughn

At the end of last month, Vaughn turned 2570 weeks old. On the date Torn died, however, Vaughn was exactly 18000 days old.