The eclipse crucifixion code is in play once again. In the New Testament, Jesus was crucified under a solar eclipse. In this story, a billionaire died in a helicopter crash.

Christopher Cline, who has Christ in his name, died in the final day of his 61st year since birth: 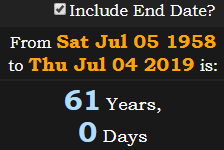 His company, Foresight Reserves LP, is headquartered in St. Louis

He died just two days after the 2019 total solar eclipse

Jesus is believed to have been crucified at age 33. Cline’s initials are C.C., like 3-3.

When spelled out, thirty-three sums to 156

In Hebrew, eclipse also sums to 156. This is because eclipses always occur either 1, 5, or 6 lunar months apart from one another.

This billionaire who died on July fourth was from West Virginia

In English gematria, eclipse sums to 69

The Governor of West Virginia, who was a friend of Cline’s and acknowledged his passing in a Tweet, was in his 69th day of his 69th year since birth:

In Jewish gematria, eclipse sums to 192

Christopher Cline died in The Bahamas

The ultimate eclipse number is 1331. Cline made his billions in the coal industry.

Cline and Coal both have gematria of 77, like the Ordinal value of Christ.

His first name, Chris, sums to 57 in Ordinal. This lines up with the Jewish gematria of his full name:

Cline’s helicopter crashed in the Abaco Islands in The Bahamas

He was known as the “New King Coal”:

Cline’s death fell just two days after this year’s total solar eclipse. These are the same two numbers found in the gematria of Moon

In Hebrew, Moon sums to 218. This matches the Ordinal gematria of Cline’s business, Foresight Reserves

The word Moon has Jewish gematria of 170

Billionaire Chris Cline has Ordinal gematria of 206, syncing up with Big Gramd Cay in Reverse and sacrifice in Jewish:

Cline’s name has multiple alignments with crash and helicopter crash.