Philadelphia gets its name from the Book of Revelation:

Revelation is the 66th Book of the Bible. Today has 66 numerology:

The bridge seen in all the images right next to the explosion is the Platt Bridge, named after George C. Platt, who died on the date June 20th, which ended just hours before the explosion. The explosion occurred on the 172nd day of the year: 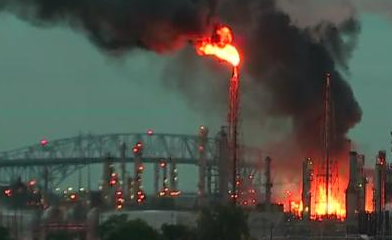 Philadelphia was incorporated 317 years ago:

It was incorporated in 1701. This explosion was 107 years, 1 day after the death of George C. Platt:

66 is the 11th Triangular number

Notice how this the above verse is the 11th of Revelation. Today is 11 days before this year’s total solar eclipse:

August 11th is written internationally as 11/8

The Mayor of Philadelphia, Jim Kenney, is currently 22233 days old:

This means the fireball in Philadelpha was 6 weeks, 5 days before the Mayor’s birthday:

The state of Pennsylvania was admitted to the Union on December 12th, meaning today is 6 months, 1 week, 2 days after its anniversary:

The Governor of Pennsylvania, Tom Wolf, is 216 days after his birthday:

I find this interesting…

There is some definite Masonic numerology in this event too. Consider how the refinery was owned by Philadelphia Energy Solutions

The refinery is right off of Highway 3019

Today, the original branch of the Scottish Rite of Freemasonry is 110300 days old:

113 is the primary number of deception.

Philadelphia was founded on the date 10/27.