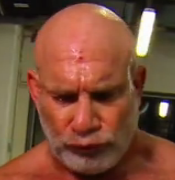 Bill Goldberg made another return to WWE this weekend to face the Undertaker. It was the WWE’s third event to be held in Saudi Arabia since they signed a lucrative 10-year deal with the government a little over a year ago.

The deal has been highly-controversial, given the nation’s poor human rights track record. Not only that, but WWE, who has made it a point to push their female talent recently, is not allowed to have women perform on the shows.

In order to stir interest for these overseas shows, WWE has repetitively gone to the well and allowed the shows to be headlined by old, mostly-retired wrestlers, many of whom are already in the WWE Hall of Fame. Fans’ worst fears about these matches came true on Friday, when Goldberg and the Undertaker locked up for one of the worst matches to be seen in recent memory.

The match started off on the right foot. Both wrestlers made their entrances with grandiose presentations. In typical Goldberg fashion, he slammed his head into his locker room door before the match, causing a small head wound:

Normally, this is fine. Goldberg reached the pinnacle of popularity in the 90’s thanks to his intensity, and fans expect this out of him.

However, this isn’t the only head wound he would suffer. A couple of minutes into the match, Goldberg went for a spear on the Undertaker, who moved out of the way. Unable to stop his own momentum, Goldberg smashed his head into the ringpost, which briefly knocked him out and sent blood gushing: 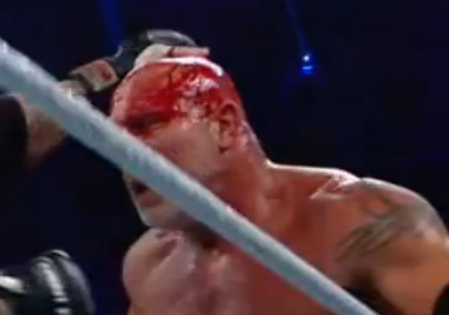 The look on Goldberg’s face says it all. He was clearly concussed and basically out on his feet. This botched spear attempt led to another botch, which led to another botch, and…well, let’s just say both men are lucky to have escaped this messy encounter without suffering any serious injuries.

His head injury occurred on a date with 52 numerology:

His opponent’s real name sums to 109.