Naturally, the media is already milking this event to tug on your heart strings. One of the victims is being portrayed as a hero who attacked the shooter and “saved lives”.

The names of the two victims are Riley Howell and Reed Parlier. Notice how both Riley and Parlier both have the word lie in them. But nevermind that – check out how the combined gematria of their names sum to 1866 in both main large-number ciphers, a trait shared by only about 1 in 450 words in the dictionary.

See my original post explaining how this was a Masonic ritual.

The highest degree of Scottish Rite Masonry is said to be the 33rd, a very significant number in their bullshit rituals.

Of the two victims, Riley Howell is the one the media is focusing on, since he’s the hero. Notice how both of his names sum to 33

When you write out thirty-three, it sums to 66, matching the name of the other victim: 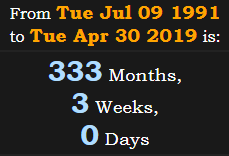 False flag has Ordinal gematria of 69, syncing up with both Riley and Reed Parlier

His name also matches the English value of false flag

A few more noteworthy things about this shooting that I left out of yesterday’s post. Yesterday was 160 days after North Carolina’s date of admission to the Union, lining up with both active shooter and Charlotte, North Carolina

In Reverse, active shooter sums to 191

The shooter is named Trystan Terrell