One of today’s major headlines on this date with 46 numerology is about a black lesbian mayor in Chicago:

Today’s date, April 3rd, is written here in America as 4/3

Black lesbian sums to 91 in Ordinal:

Chicago and Chicago, Illinois have gematria of 91

Chicago’s lesbian mayor was elected 91 days before the next total solar eclipse:

Her election falls exactly 589 days after the most recent total solar eclipse, syncing up perfectly with her full name:

It’s clear why the election of a lesbian mayor is synced up with solar eclipses.

This story is about a female elected Mayor in Chicago, Illinois

Today is the 93rd day of the year. Lori Lightfoot was born on a date with 93 numerology:

59 is a number stamped on black people throughout history.

The final day of Black History month is the 59th day of the year. That month is February, which sums to 42, another number stamped on blacks.

Lori Lightfoot was elected on April 2nd, written 4/2. She was a span of 242 days after her birthday, and 4 months, 2 days before her next:

Notice how her birthday is August 4th. Former U.S. President Barack Obama, who was a senator in the state of Illinois, where Lightfoot was elected, was also born on August 4th, or 8/4

Of course, it’s not enough to just win the election. Gone are the days where newly-elected officials will jam on stage with a saxophone; now, the politicians feel it’s necessary to share their queer lifestyle with the rest of the world: 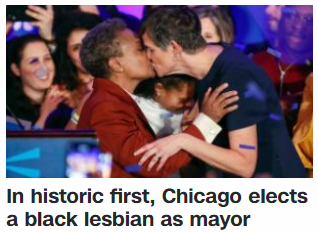 Ugh. What’s worse, they felt it necessary to code the divine feminine number into their headline, twice.

Preckwinkle was born on March 17th, written 3/17, which is 7 months, 13 days after Lightfoot’s birthday:

Recall how recently, Jussie Smollett, who was born 3 months, 17 days after the date Chicago was incorporated, lied about what happened to him in Chicago when he was 13,371 days old: