Rhode Island was the 13th and final colony to ratify the U.S. Constitution and join the Union. The first Governor of Rhode Island was Nicholas Cooke, who officially assumed office in 1775. His name has Ordinal gematria of 130

He was born on a date with 13 numerology:

He spent exactly 130 weeks in office:

The day he left office was a span of exactly 13 weeks after his birthday: 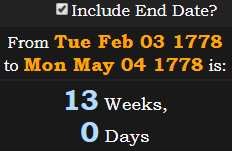 His first day in office was 2 months, 27 days before his birthday:

He died 227 weeks after his last day in office:

Thirteen has Ordinal gematria of 99

Cooke’s first day in office, November 7th, was the 311th day of the year:

Nicholas‘s last day in office was May 4th, written 4/5

Converting to years, we find he spent 2 years, 179 days as Governor: 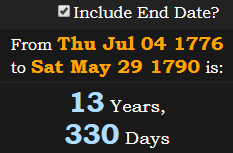 Rhode Island was named after the Greek island of Rhodes

Rhode Island’s date of statehood had Reduced numerology of 33

13 and 33 are also both related to the Moon, which has 13 lunar phases every couple of years. The lunar calendar adds one year every 33 years to keep it synced up with the solar calendar.

Nicholas Cooke‘s last day in office was a span of 22 months, 1 day (or 670 days) after Independence Day:

The number 19 has Jewish gematria of 244, which matches both Governor of Rhode Island and Governor Nicholas Cooke in Ordinal.

There are 19 years in the Metonic cycle

The Moon has an equatorial diameter of 2160 miles. Rhode Island gained statehood on the date leaving 216 days in the year:

Cooke was born in 1717, the same year modern Freemasonry was founded. When he first assumed office, he was 58 years, 277 days old, or in his 59th year since birth:

That same date was a span of exactly 7 months, 4 days before Independence Day, which was on the date written 7/4 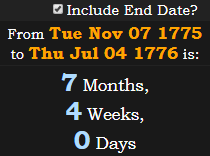 Cooke would later pass away 74 months after Independence Day:

He was 223 days after his birthday:

Rhode Island was admitted to the Union in the 74th year since Cooke’s birth, 115 days after his birthday:

His last day in office fell 4408 days (or 12 months, 25 days) before Rhode Island would eventually become a state:

Cooke died when he was 787 months old:

His death fell on the 257th day of the year:

The date of Cooke’s death, September 14th, can be written 14/9. Rhode Island ultimately became a state on May 29th, the 149th day of the year: