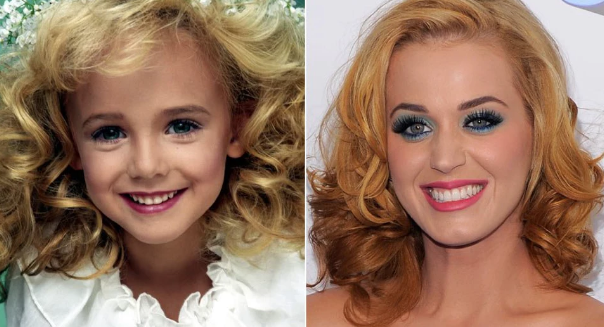 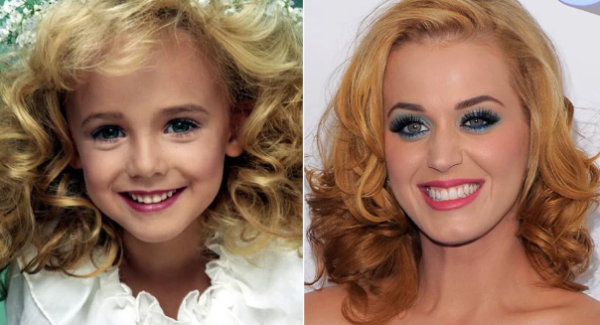 Personally, I’m not sure what to think. The above comparison can neither prove nor debunk anything. If you want to call this a wacky conspiracy theory, you might be right. There are many pictures of Katy Perry as a child…they certainly look like Katy, and not overhwlemingly similar to JonBenét.

However…we know the elites use numerology to code their mainstream celebrities, and the alignments between JonBenét and Katy Perry could absolutely be used to build the case that they are indeed the same person. It also may be possible that these two are simply related, or perhaps even clones of one another. There’s not much that would shock me at this point.

To begin with, allow me point out how Katy Perry, whose real name (and original artist name) is Katy Hudson, is a “coded” celebrity. She was born on a date with Full numerology of 138 and a Life Lesson number of 57

Ramsey and Hudson share the same values in 3 of 4 base ciphers:

When JonBenét was allegedly murdered, she was 333 weeks, 3 days old: 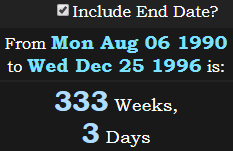 This is also exactly 146 months:

Freemasonry is obsessed with eclipses

Ramsey had Standard birth numerology of 104

The Death of JonBenét Ramsey (name of Wikipedia’s article) fell 10 weeks, 4 days before the next total solar eclipse

Notice there’s only one number JonBenét Patricia Ramsey does not share with Ritual human sacrifice, which is 211

She was born 2111 days after Katy Perry:

318 is a number loosely-related to the circle

Their births are also separated by 301 weeks, 4 days:

Pi is a pretty significant number, but so is phi, or the golden ration, which is 1.61

The JonBenét Ramsey Hoax
The Death of Patsy Ramsey (2006)