The holiday was created in Copenhagen

The decision to have an annual Women’s Day was made on 1910, which has the number 19 forwards and backwards.

That was a date with Full numerology of 58

It first became a holiday in Russia in 1917, but wasn’t adopted by the United Nations until 1975:

These dates are separated by exactly 58 years:

Check out this other holiday called the International Day for the Elimination of Violence Against Women, which is held annually on the 25th of November

The first time the holiday was celebrated in 1909, it was just called National Woman’s Day

The decision to have an international holiday was made in Denmark

After the 1909 holiday was celebrated in America, it was decided in 1910 to make the holiday international. This means it was first celebrated outside the U.S. in 1911, on the 19th day of the month:

International Day for the Elimination of Violence Against Women was approved by a United Nations resolution on December 17th, 1999, a span of 11 months, 9 days before it was first celebrated in 2000: 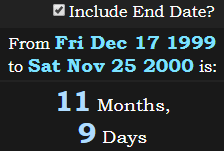