March 4th is written 3/4. It was exactly 34 days before WrestleMania, which will be held at MetLife Stadium in New Jersey, the state Bundy was born in:

Converting to weeks, we find it’s 4 weeks, 6 days before WrestleMania:

Undoubtedly, Bundy’s biggest moment as a professional wrestler was at WrestleMania 2, where he battled Hulk Hogan in a Steel Cage match in the main event.

That event fell on April 7th, 1986 – the only WrestleMania to ever occur on a Monday. That means it was exactly 33 years to the day before this year’s WrestleMania event, also on April 7th:

Curiously, Bundy’s real name Chris Pallies sums to 395, which looks a lot like 895…

The film King Kong came out in the year ’33

News of King Kong Bundy’s death did not break until March 5th, which falls a span of 31415 days after the film King Kong‘s initial release:

It was 120 days before the next total solar eclipse

Measuring instead to the most recent total solar eclipse, we find it’s been a span of 197 days since its anniversary:

Christopher Alan Pallies died a span of exactly 1 year, 28 weeks after that eclipse: 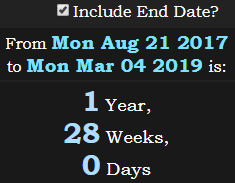 He died exactly 1717 weeks after he Main-Evented WrestleMania 2:

The date he died had 17 numerology:

The guest ring announcer for WrestleMania 2 was Cathy Lee Crosby

Think about 34 and 33 in light of how he died on 3/4, 34 days before a WrestleMania that will be exactly 33 years after the one he headlined.

She was the ring announcer for Bundy’s Steel Cage Match

Bundy was 221 weeks younger than his opponent, Hulk Hogan:

It’s WrestleMania 35 coming up next month. Thirty-five has gematria of 1331, the ultimate solar eclipse number.

Thirty-five sums to 61 in Reduction

Bundy died at age 61
His real name was Christopher

The date he died is written internationally as 4/3

Check out how long it’s been since his birthday:

WrestleMania falls on the 97th day of the year, syncing up with his real full name:

He fought Hulk Hogan in the Main Event of WrestleMania 2

News of his death broke on the 64th day of the year: