Virginia was the 10th state admitted to the Union.

In Reverse Ordinal, Virginia sums to 127

The first Governor of Virginia was Patrick Henry, who served as both the first and sixth Governor. His two terms began a span of 100 months, 27 days apart: 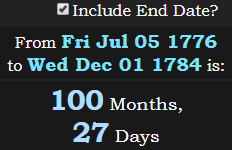 His second term lasted exactly 730 days and ended on a date with 116 numerology:

December 1st, the first and last day of Henry’s second term, was his 187th day of his age:

The date had a Life Lesson number of 38

His death fell 347 days after the anniversary of Virginia’s date of statehood:

It was also a span of 3999 days after Virginia was admitted to the Union:

Henry died 4570 days after his last day in office: