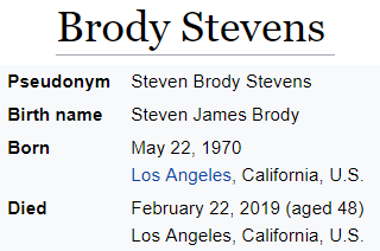 This post will discuss the numerology of the death of Brody Stevens, and how it is related to a show he starred in that aired on Comedy Central for just over one month. 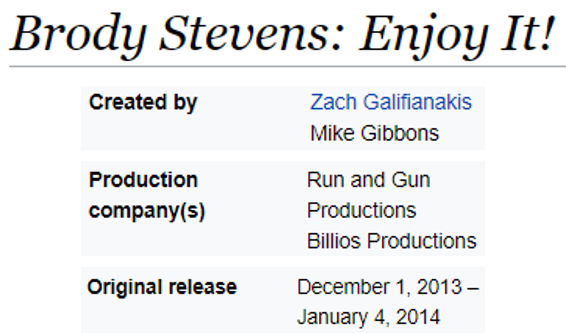 Brody Stevens was born as Steven James Brody and passed away on February 22nd, a date that can be written 22/02 internationally.

Enjoy It! was created by Zach Galifianakis. 2/22 is a span of 222 days before his birthday:

222 is the English value of the word eclipse

An eclipse always and only occurs either 1, 5, or 6 lunar phases after a previous one. 156 is the Hebrew value for eclipse

This is Stevens’ Full birth numerology:

It’s the Saros cycle that allows us to predict the next eclipse. The cycle is 223 lunar phases long.

Stevens was born on the date leaving 223 days in the year:

When Brody Stevens’ show Enjoy It! first aired, he was 522 months old:

The show was created by Zach Galifianakis

Meton is the astronomer credited with figuring out the Metonic cycle, which is the other significant cycle involving the Moon. Enjoy It! ran its first episode on December 1st.

The Metonic cycle is a period of 235 lunar phases that syncs up with 19 years.

In the 19 years of the Metonic cycle, 7 of them have a thirteenth month

Stevens died 130 days before the next total solar eclipse:

Note the 55 in Reduction above – Stevens died exactly 550 days after 2017 Great American eclipse, which is still the most recent one to have occurred:

He also died a span of 5 years, 50 days after the final episode of Enjoy It! 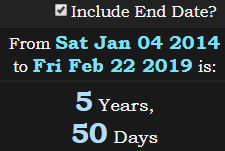 The show first aired on the First of December, written 12/1

The first episode was titled Brody Stevens, Who Are You?

Stevens’ show was produced by Run and Gun Productions

The other production company was Billios Productions

There are 254 sidereal months in the Metonic cycle.

In Greek, the Metonic cycle is called Enneadecaeteris

Stevens also died a span of 277 days after his birthday:

The full name of his show sums to 2770 in Jewish gematria:

Enjoy It! aired its final episodes on January 4th

He died on a date with Standard numerology of 43

When Enjoy It! was on the air, Stevens was 43 years old:

When his first episode aired, it was a span of 1910 days before he passed away:

Without the end date, this first episode aired 1909 days before he died:

The final episode aired on the Fourth of January. Stevens was born on May twenty-second