The Padres play on the 117th meridian:

Manuel Machado went from the Dodgers to the Padres

Machado also has birth numerology of 24

The name Manny sums to 67

Below, you will see how Manny Ramirez ,who also played for the Dodgers, is another part of this riddle.

In Greek, the Metonic cycle is called Enneadecaeteris (nineteen years)

In Hebrew, the word for Moon sums to 218

The 218th Prime number is 1361. This number is attributed in English gematria as well. 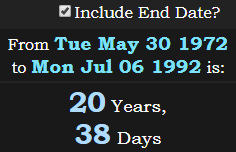 Manny Ramirez joined the Dodgers in 2008, which was their 119th season. It was 119 months before Manny Machado joined the same team:

Machado has Full birth numerology of 124

It will be the Padres’ 51st season.

Machado’s first game as a Dodger came in Milwaukee against the Brewers, who I’ve been consistently saying are the Moon team of the Major Leagues. The Dodgers even went on to play the Brewers in the NLCS. This game was on July 20th, 2018, the 49th anniversary of the Moon landing:

That game ended with a score of 6-4

NASA, who faked the Moon landing, was established on a date with 113 numerology:

113 is the primary number of deception
The Challenger disaster occurred 1:13 after launch
The Columbia disaster was the 113th shuttle launch
NASA’s current Administrator, Jim Bridenstine, was sworn into his role on the 113th day of the year:

The Winning Pitcher in that game was Rich Hill, whose full birth numerology is 113

The Losing Pitcher was Taylor Williams, whose 27th birthday was the very next day.