Maryland was the seventh state admitted to the Union.

Its date of statehood had numerology of 30

That same date was a span of 11 years, 300 days after Independence Day: 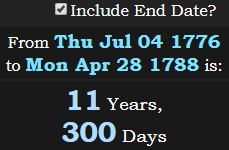 The first Governor of Maryland was Thomas Johnson
He was born on November 4th, written 11/4

In that Francis Bacon cipher, Thomas Johnson sums to 223

In the other capital letter cipher, Thomas Johnson sums to 340

Thomas Johnson took office as Governor 137 days after his birthday:

This was 133 months, 7 days before Maryland’s date of statehood:

It was just a week after he turned 47 years old:

Johnson was a judge, but is officially titled a jurist

After his role as Governor, Johnson moved on to become the Associate Justice of the Supreme Court of the United States

His death fell 27 years, 81 days after the date he took office as Associate Justice: