Georgia was the 4th state admitted to the Union. To this day, it is one of only two states with Reduction gematria of 44.

The first official Governor of Georgia was Archibald Bulloch. He assumed office on January 22nd, 1776, a date with a life lesson number of 44

He was one of four Governors before the British regained control in 1778, when they installed another “Archie“, Archibald Campbell, on a date with 37 numerology: 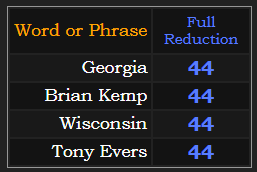 Bulloch took office on a date with Full numerology of 116

Archibald Bulloch took office on the date January 22nd, written 1/22. This is the Ordinal gematria of the British Archibald:

Archibald Campbell had birth numerology of 68

Perhaps we shouldn’t be too surprised that Bulloch died in office. Of the four states I’ve decoded thus far, the first Governor of 3 of them died during his term.

Campbell died 13 weeks, 1 day after the anniversary of the date he took office: 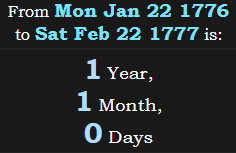 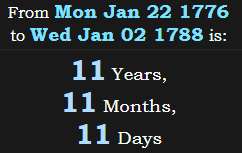 Instead measuring from Bulloch’s death to Georgia’s admission yields even more 11‘s: 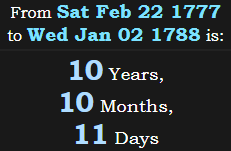 Georgia’s date of statehood was 143 months after he took office:

Bulloch’s birthday is listed as January 1st, 1730. If that’s true, he would have been exactly 46 years, 3 weeks old when he assumed office: 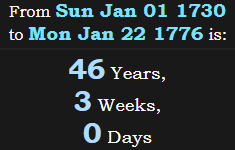 Campbell died on March 31st, the 90th day of the year:

The date Bulloch died had Reduced numerology of 28

The name Bulloch has matching gematria with sacrifice