Pennsylvania was the second state admitted to the Union on December 12th, 1787.

That same date was a span of 79 days, or 2 months, 18 days after his first anniversary in the role: 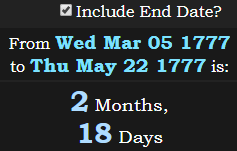 79 is the 22nd Prime number
He died on the 22nd day of the month
The date he took office had 22 numerology:

Although he died on the 22nd, he was not officially removed from office until the 23rd. From May 23rd to December 12th, the date Pennsylvania was eventually admitted to the Union, is 203 days:

The phrase total solar eclipse also has gematria of 202

Wharton died exactly 33 days before the next total solar eclipse:

Jesus was crucified under an eclipse at age 33

That eclipse fell on June 24th, which was the anniversary of modern Masonry, whose highest degree is said to be the 33rd.

Wharton died on a date with 105 numerology:

The date Wharton died also had 50 and 32 numerology:

Francis Scott Key, who wrote The Star-Spangled Banner, was born in 1779