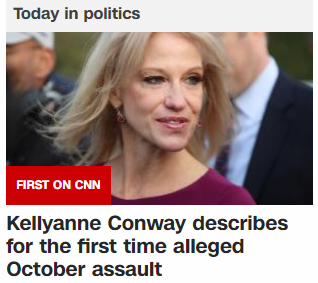 Kellyanne Conway is in the headlines on February eighth

February 8th is written 2/8
This assault occurred in Bethesda, Maryland

The restaurant was called Uncle Julio’s, which is a chain that began in Dallas, Texas

The article mentions how Conway dialed 9-1-1

No date for the assault is given, but we do know it happened in October, the only month with 33 gematria.

The woman accused of assaulting her was 63 years old.

Kellyanne Conway turned 50 years old on the day Donald became President of America. It was the same day she assumed her role as Counselor to the President.

When you add 19 to its prime relation, 67, you get 86
This assault happened during the Kavanaugh hearing
Recall how Julio’s opened in the year ’86

19 is a significant number to the Moon, which has the 19-year Metonic cycle.

Consider how the Moon is mathematically related to Saturn

She was assaulted by a woman named Mary

The Moon ranges 28.5 degrees north and south of the Equator, meaning it has a total range of 57 degrees in the sky.

On the date she took office, she was exactly 2,609 weeks old:

The number 269 is only one off of Conway’s Ordinal gematria, which is 268

There are 235 synodic months in the Metonic cycle.

Today is 144 days before the next total solar eclipse:

Of the 19 years in the Metonic cycle, the other 7 have 13 lunar phases.

Today is 18 days into the 18th month since the most recent total solar eclipse.

This matches the name of the woman who assaulted her:

The Governor of Maryland is Larry Hogan. He is 15 weeks, 1 day (or 106 days) before his birthday:

151 in Octal is 227, which matches his full name’s Ordinal gematria:

This syncs up with today’s numerology: