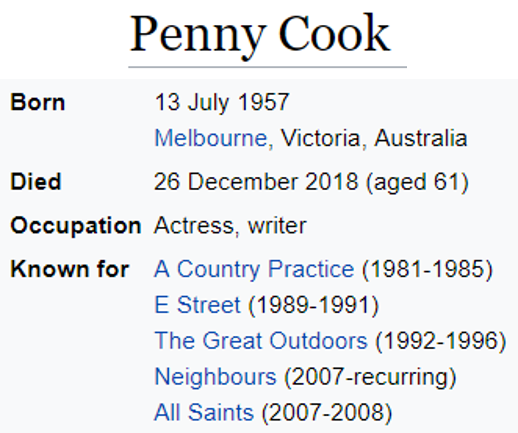 The name Penny Cook has double gematria of 1-1-8

Penny died at age 61 in relation to a solar eclipse

Cook is said to have died from cancer

She died exactly 38 weeks after April 4th, the date written globally as 4/4, on a date with 38 numerology

She was best-known for her role in a TV show called A Country Practice. Her death was 38 days into the 38th year since the show’s premiere in 1981:

This past April 4th had Full numerology of 46

The date mentioned above, April 4th, is the date that leaves 271 days in the year:

She died on December 26th

The show she was best-known for, A Country Practice, has gematria of 192 like eclipse

Cook died on a date with Full numerology of 76