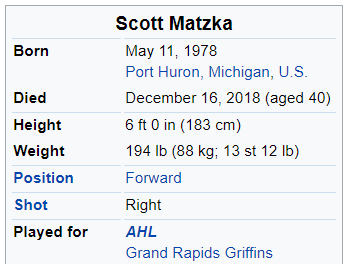 “Catfish” Hunter was born in the year ’46. Scott Matzka died on a date with Standard numerology of 46

Matzka died a span of 199 days before the next total solar eclipse on July 2nd of next year, the date written in the United States as 7/2

3.14 are the first three digits of pi
The circle is the mark of the Beast

Matzka died of Lou Gehrig’s Disease, or ALS. Earlier this year, Stephen Hawking died from ALS on 3/14
When his death was announced, it was still 3/13 in the United States

Matzka died a span of 31 weeks, 3 days after his birthday: 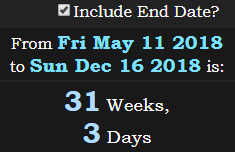 Six hundred threescore and six is how the King James Bible writes out the number of the Beast, 666

That 66th and final book of the Bible is Revelation

Revelation culminates with the second coming of Jesus

In that same method, Jesus the Messiah sums to 1331, the number that represents a solar eclipse, which Jesus was apparently crucified under.

Seem like a coincidence? Consider that the headlines on December 16th, the same date Matzka died, were flooded with the death of Colin Kroll