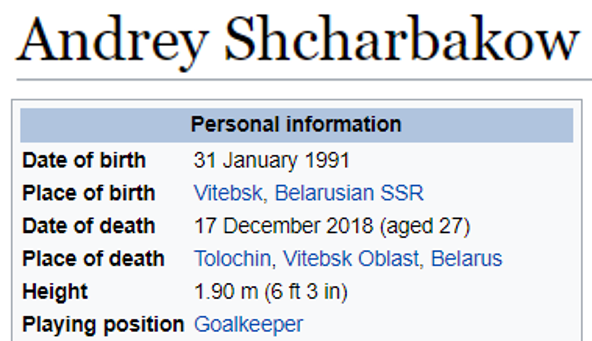 It’s said this man died in a traffic collision yesterday, December 17th, at the young age of 27. Notice how his name was often spelled Scherbakov

He was a Belarusian footballer. Football (including American football) is a game of 11-on-11, meaning there are 22 players on the field. Shcharbakow died on a date with standard numerology of 22

The most recent total solar eclipse was exactly 69 weeks before his death:

This is also a span of 484 days, ideal for a footballer to die:

It’s appropriate that a Belarusian would be chosen for this ritual:

Andrey died on a date with Full numerology of 67

The date also had Standard numerology of 47

Shcharbakow won a Belarusian Premier League championship in the year 2011.

Check out the gematria of his real, full name:

Notice his Reduction gematria of 131. His birthday happens to be January 31st, written in the United States as 1/31

Internationally, January 31st is written 31/1 – in Ordinal and Extended, Shcharbakow has 311 gematria.

He died a span of exactly 46 days before his birthday:

And he died a span of exactly 46 weeks before November 3rd, written 3/11 internationally:

In the United States, November 3rd is written 11/3 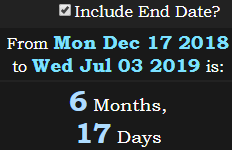 Shcharbakow died exactly 6 months before (and consequently, 6 months after) the only date written as 6/17
Internationally, June 17th is written as 17/6, tying back to Shcharbakow’s common name gematria:

In Reverse, his common name sums to 283

He died a span of exactly 28 weeks, 3 days before Belarus’s Independence Day: 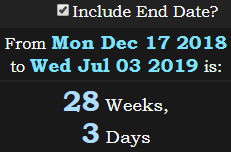 Shcharbakow, a footballer from Belarus, died in a traffic collision