Today is a date with Full numerology of 54

The Mayor of Seattle is Jenny Durkan, who is credited with letting the news of the unanimous vote slip:

She is in the first day of her 54th week in office: 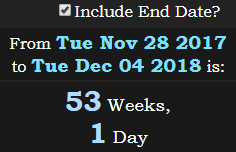 This is equivalent to 12 months, 6 days:

There’s no real way to know when the 2021 season will begin. But if it starts on the first Wednesday of October, just as it did this year, that would be exactly 1037 days from today:

This would be perfect to round out a numeric ritual involving Jenny Durkan, mayor of Seattle, WA