The ritual killings of Bruce and Brandon Lee were tributes to Time. The name  Bruce Lee has a simple gematric connection to Time:

He died exactly 71 weeks before the next total lunar eclipse:

He was born on a date with Reduced numerology of 25

These are the Hebrew and Yiddish values for the word Time

The most significant period of time is the Metonic cycle, which is a period of 19 years that syncs up almost exactly with 235 lunar phases.

The significance of the number 19 in relation to time has been understood for thousands of years. The Greeks encoded this number into their language for the words Time and Moon. The word Sun begins with the 19th letter, and The Sun is the 19th card of the Tarot’s Major Arcana.

Bruce Lee went to college at the University of Washington in Seattle, where he and his son Brandon are both buried. Seattle’s signature structure is The Space Needle

Seattle sits on the 47th parallel.

In the English alphabetic order, the word Time sums to 47

There are 23.5 degrees between the Equator and the Tropics of Cancer and Capricorn, meaning there are 47 degrees separating the tropics. The compass on the Freemasonic emblem is set to 47 degrees:

The Space Needle has a rotating restaurant on top. It completes one revolution every 47 minutes.

Bruce Lee, whose real name was Lee Jun-fan, died on a date with a Life Lesson number of 47

He was 4 months, 7 days before his next birthday:

This same duration is also 1027 weeks:

The date Brandon died had Standard numerology of 127

His funeral was just 3 days later on April 3rd, which was 127 days after what would have been his father Bruce’s birthday:

The date Bruce Lee died was July 20th. Does that sound like a familiar date? It was the 4th anniversary of the first Moon landing:

19 isn’t just significant in relation to time, but also in death. If you follow my work, you understand that they share many of the same numbers. The Jewish gematria of nineteen sums to the same as the Hebrew word for kill

Again, the 19th Prime number is 67, as highlighted above.

This is also the gematria of Brandon Lee’s full name:

Brandon was born on February 1st, written 2/01
Bruce Lee died on the 201st day of the year:

His son Brandon was born on the 32nd day of the year:

The Sun is said to be 93 million miles away. 93 is a significant number in murder / killing rituals, as highlighted in this slide.

The date of Brandon’s funeral had Full numerology of 119, just like the date his father Bruce died:

In Reverse Reduction, Jeet Kune Do sums to 52 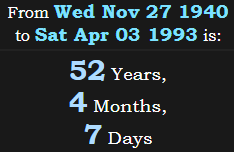 Brandon Lee died a span of exactly 44 weeks, 0 days before his next birthday: 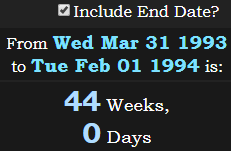 This means he was in his 59th day of his age: 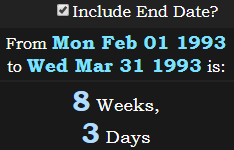 His father Bruce died exactly 130 days before his next birthday: