It’s said that some of the people who survived last night’s shooting were also survivors of the Route 91 shooting.

In fact, one of the witnesses they showed on TV made it a point to flash his Route 91 tattoo at us:

So how about this alignment between the Route 91 and Borderline Bar & Grill shootings:

Both events were centered around Country music:

They occurred exactly 1 year, 1 month, 6 days apart from one another: 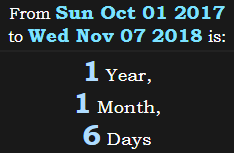 Earlier this week, the nation (thought they) voted in the 116th Congress. Worth pointing out  that 116 is an upside-down 911.

Including the end date, it’s 1 year, 1 month, 7 days. More on 117 below. But it’s also pretty interesting that country music has the same gematria as Borderline Bar & Grill

The bar was hosting College Country Night, which sums to 91, pointing us back to the Route 91 festival shooting.

The date of the Route 91 shooting was October 1st, written internationally as 1/10

Borderline Bar and Grill is located in Thousand Oaks, California

The date is written 10/1 in the United States, which was good for an assassin raining bullets down from Mandalay Bay Casino

The Route 91 shooting was in Las Vegas, Nevada

Last night’s shooting was on a date with 18 numerology, leaving 54 days in the year:

The city of Thousand Oaks is 54 years old:

In the Reverse order, country sums to 73

As I consistently expose, 13 is the primary ritual / hoax code, and it’s quite prevalent here. Reports say that including the shooter, 13 people died in this incident.

Consider that the California bar shooting occurred on the date 11/7 in California:

The bar was hosting College Night, packed with students from Pepperdine University, before gunman Ian Long showed up to spoil the party.

Pepperdine sums to 45, just like 13 in both Reduction methods

California was admitted to the Union on September 9th, written 9/9 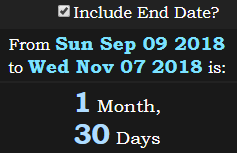 The mayor of Thousand Oaks was selected on December 5th of last year, which was 11 months, 3 days before the shooting:

Ventura County held an active shooter drill on September 10th, which was 1 year, 59 days (end date) or 1 year, 58 days before the bar shooting: 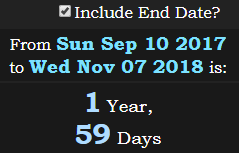 The highest degree of masonry is supposedly the 33rd

It’s said the gunman was a former Marine

Thousand Oaks was incorporated as a city on October 7th, 1964. October 7th was a span of 33 days before we got news of this shooting:

58 is a signifcant number to Freemasonry