The film Bohemian Rhapsody features a cinematic recreation of the Live Aid concert from 1985.

Rather ironically, Mercury, the lead singer of Queen, who wound up coming out as a “queen“, would later die of AIDS when this Live Aid concert was perhaps his most iconic as a performer.

This film was released in the United States a span of 3 months, 3 weeks after the 33rd anniversary of the Live Aid concert: 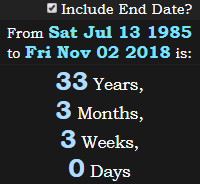 The film was released in the UK 9 days earlier. That date was 33 years, 103 days after the concert:

The Live Aid concert was held due to the success of a song called  “Do They Know It’s Christmas?” by charity supergroup Band-Aid. The song was released exactly 33 weeks before the concert: 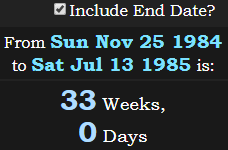 Freddie Mercury contracted AIDS due to his homosexual lifestyle. He died a span of 137 days after the most recent total eclipse