The Boston Red Sox are celebrating their World Series victory with a Duck Boat parade.

Fitting that the championship parade is being held on 10/31

There were 31 people on board the Duck Boat in Branson

The incident occurred 3 weeks, 1 day (or 22 days) before Missouri’s anniversary of being admitted to the Union:

The 22nd Prime number is 79, matching the date numerology of the parade, and the name of the Red Sox manager: 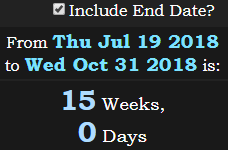