Whitey Bulger, boss of the Winter Hill Gang, is dead in West Virginia on a date with full numerology of 78

Bulger is originally from Massachusetts

The name Bulger has Jewish gematria of 314, just like Preston County, West Virginia, where he died.

3.14 are the first three digits of Pi

He died exactly 88 months, 8 days after he was arrested:

This same duration is equivalent to 7 years, 130 days:

If you flip the digits in 713 upside-down, it becomes the word LIE

When he was arrested, he was 10 weeks, 3 days after his birthday:

It was also 10 months, 3 days after the anniversary of his name being added to the list of the FBI’s 10 Most Wanted:

This gangster from the Winter Hill Gang died in prison a span of 9 weeks, 1 day before the start of 2019

His full name, with nickname included (a very legit method of calculation), sums to 89, matching the gematria of Winter, as well as the city he was killed in: 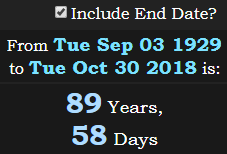 The date has 58 numerology:

Is the gang connected to Freemasonry?

Both the county and town he died in has matching numbers:

Boston was incorporated as a city on the date 3/4

In that Reverse Reduction method, his full name sums to 137

His gang was based in Massachusetts, one of just a handful of states with 33 gematria

He died in West Virginia, which has matching gematria with thirty-three