Click the headline above to see video of what Megyn Kelly said to get herself in hot water. It’s absolutely insane what people are getting upset about these days. All she says is that it was okay when she was a kid, as long as you were playing a character.

Perhaps she said more, but I’m not gonna go digging for the full clip. Either way, it’s something that’s been blown out of proportion, just like Roseanne’s tweet from May. Of course, the real mind fuck is that Roseanne and Megyn Kelly are actresses, and this is all part of the script, part of a larger agenda. If you don’t think the thought police are well on their way…this is the type of shit that should make you turn your head.

As always, this type of ritual was done by the numbers. To begin with, let’s simply look at the Ordinal gematria of Megyn Kelly

Her show debuted on September 25th of last year:

This means these comments were made a span of 1 year, 29 days later: 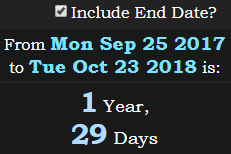 The downfall of Megyn Kelly is symbolic of a ritual sacrifice. She was in the last day of her 2,501st week since birth: 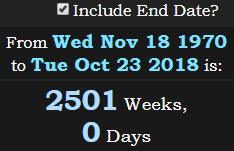 Furthermore, she was in her 340th day of being 47 years old: 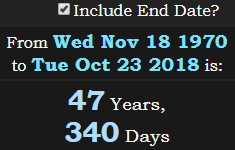 The 47th Prime number is 211
This matches the name of her show:

The date her show originally debuted also had 71 and 44 numerology:

October 23rd was the date that left 69 days in the year: