Notice how Taiwan‘s gematria looks like the date you reflect the date beneath. It makes sense, after all – like the headline said, the train flipped (check the gematria on train and flips).

The date of the crash had standard numerology of 49

The final verse of Revelation is 22:21 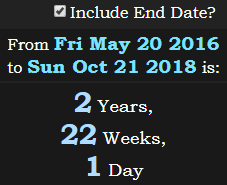 Naturally,  Tsai Ing-wen sums to the same as Revelation in all four base ciphers:

I hope this is a coincidence, but I’m not sure. I don’t know if they would really code the Trigonal value of this word into the headline, but it wouldn’t surprise me.