Roman Reigns opened up last night’s episode of RAW last night with what started as a normal promo, but one that quickly turned serious. By the end of the segment, he had vacated his Universal Championship due to a recurrence of leukemia that he apparently had been diagnosed with once before when he was younger.

WWE has established its business model by blurring fiction and reality ever since they began promoting events in the 50’s. While the wrestlers do occasionally end up with real-life problems, this story appears to be nothing other than an act, crafted by the numbers, perhaps with the long-term goal of getting the fans to accept the presence of Reigns on top of the roster.

Roman Reigns’ announcement of relinquishing the Universal Title was a numerical ritual in tribute to the crucifixion of Jesus.

Roman Reigns vacated the Universal Title (named after the WWE Universe, what they call their fans) exactly 61 weeks after the 2017 Great American total eclipse (more on eclipses below):

Not only does Reigns have double gematria of 36, but his character’s initials, R.R. sum to 36

On the date of the announcement, Reigns was in his 151st days of being 33 years old: 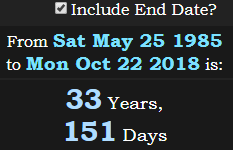 This is also 21 weeks, 3 days after his birthday

Leukemia has the same gematria as Christ

Per the Gospels, Jesus was crucified during a total solar eclipse

The date of the announcement had full numerology of 70

This number is found in both his real name and his character’s name:

Notice how seventy has a lot of overlap with Jesus

The date had Tiny numerology of 14

Roman Reigns and vacated both sum to 133, a number loosely-connected to Jesus. Remember, 1331 is the number that represents a solar eclipse.

Finally, the date had alternate numerology of 41

The date October 22nd is written 10/22, which represents 122 in numerology