This will be a summary of how the numbers of the Moon guided us through the 2018 MLB postseason.

Los Angeles, California might be the premier “Moon” city in America. The Moon has a 19-year cycle that syncs up with 235 lunar phases.

The Dodgers hit a franchise-record 235 home runs during the regular season.

The date Los Angeles was incorporated as a city on May 23rd, 1835, had double numerology of 45

Moon begins with the letter M, the 13th letter of the alphabet. The Moon has 13 lunar phases every couple of years.

In Hebrew, The Moon sums to 223
There are 223 lunar phases in the Saros cycle

In 2005, Mark L. Attanasio purchased The Milwaukee Brewers for $223 million

The Milwaukee Brewers are also closely-connected to the Moon and its 19-year Metonic cycle.

Their logo is the letter M, the 13th letter, which is of course the same as Moon

The Brewers’ first season in Milwaukee was 1970
Their manager, Craig Counsell, was born in 1970

The Metonic cycle is credited to an astronomer named Meton

The Dodgers’ starting pitcher was Walker Buehler
He was a span of 2 months, 23 days after his birthday: 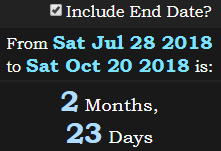 This means he was a span of 9 months, 9 days before his next birthday:

The starter for the Brewers was Jhoulys Chacin, who threw 36 pitches

He was 2 months, 18 days before his birthday:

In Hebrew Ordinal, Moon sums to 38

In the Ordinal methods, thirteen sums to 99 and 117

The Dodgers beat Atlanta and Milwaukee to get to the World Series, where they will have to beat Boston in order to win it all. What’s unique about these cities?

The Braves have called all three of them their home.