You have to love the gematria of this headline.

The date of the murders and subsequent Amber Alert was October 15th, the date written 10/15

The parents were named James and Denise Closs

They were from the city of Barron

Both parents were long-time employees at a local Jennie-O Turkey Store. Jennie-O is owned by Hormel, which has matching gematria with the name of the town they were from, Barron, Wisconsin

The date had a life lesson number of 36

Jayme Closs is from Barron

She even has the 888 in Reverse Sumerian, like the Greek Isopsephy of Jesus

Her parents were killed on Monday, the 15th, the same day I got the ridiculous Amber Alert on my phone.

It was 18 days before governor Walker’s birthday:

The story of Jesus comes from the Abrahamic Religions

Her parents’ names were James and Denise Closs

They were killed 32 weeks, 2 days before the anniversary of Wisconsin’s admission to the Union:

In Ordinal, their names sum to 191

As I always say, measuring to the dates local politicians took office never fails to reveal more. There are some very interesting alignments between the governor of Wisconsin, Scott Walker, and the mayor of Barron, Ron Fladten.

Interesting that Fladten was elected with 330 votes.

I can’t find the date he was sworn into office, but the election took place on April 3rd, the 93rd day of the year:

On the date of this news event, Walker had been in office for 93 months:

More specifically, Walker had been in office for exactly 406 weeks:

Ron Fladten was elected mayor a span of exactly 28 weeks before the incident in Barron: 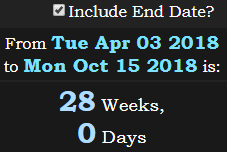 I love the quote Fladten gave after he was elected:

This quote sums to 122 in Reduction, which matches the Ordinal value of Jayme Closs. It’s not outside the realm of possibility to think this man was placed in office specifically to oversee this national news event in a small town of under 4,000 people.