Ok…really?!  Over the past several weeks, the news has been obsessing about Hurricane Florence, which made landfall primarily in South Carolina. It’s said to have caused the deaths of at least 30 people.

Just weeks later, we get reports of a mass shooting involving police officers in Florence, South Carolina. Who needs numbers to show the news is bullshitting us?

The shooting occurred on a date with 42 numerology, matching the Reduction value of Florence

Today, the date written 10/3, is exactly 13 weeks after Independence Day:

The Governor of South Carolina, Henry McMaster, is a span of 130 days after his birthday:

But even better – the 2017 Great American total solar eclipse, which exited the nation in South Carolina, was a span of exactly 13 months, 13 days ago: 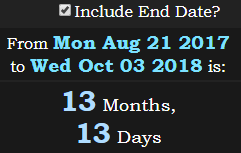 The mark of the Beast is a circle

South Carolina’s date of statehood was on the 144th day of a leap year:

In the Reverse order, mark of the Beast sums to 234

South Carolina has been a state for 230 years, 4 months, syncing up perfectly with the gematria of the location of this shooting:

1331 is the number that represents a solar eclipse. Today’s date has both 13 and 31 numerology:

3.14 are the first three digits of Pi

Often, eclipses occur on the same date 19 years apart due to the Metonic cycle.