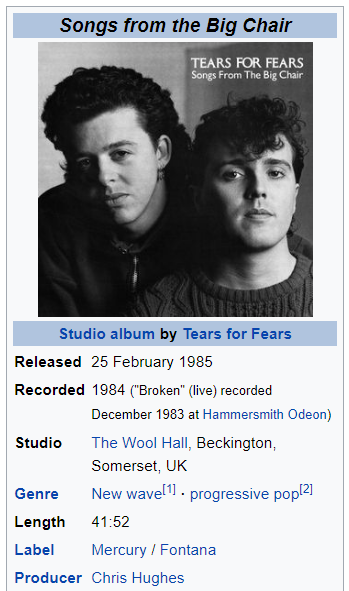 The Jesuit Order, whose logo is a circle, was founded on the 270th day of the year. See more

When asked about the name of the album, Curt Smith issued this quote:

The album was released on a date with 32, 40, 50, and 112 numerology, perfectly matching the word Circle in all four base methods:

The album has 8 tracks. That’s the only number they could have chosen that is only made up of circles.

It was recorded The Wool Hall, which sums to 50, the same as Circle

We saw the Reduction gematria of the album’s eight track titles above. Check out the value in the alphabetic order:

It sums to 1,216 – notice the last three digits. This is the same as the album title, Songs From The Big Chair, in the same method:

Which brings us right back to the Mathematics of the circle

And what do you know? This just happens to match the names of the tracks in the Reverse order.

The simplest equation you can use to get the first three digits of Pi is 22÷7
This also works in gematria:

1331 is the number that represents a solar eclipse, the most significant moment of time involving circles. I point this out because I noticed this:

This is the part that spooks me out. I looked into this album for a couple of reasons – first off, in 8th grade Drama class, I performed the song Shout for a lip sync we had to do. (Yes, I did the full 6+ minute version). Second, the song Everybody Wants To Rule The World was the first song to become #1 on the billboard charts after I was born in 1985.

And the first line of the song? Welcome to your life… 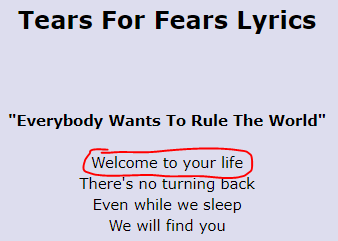 But the really strange part? Check out how Everybody Wants To Rule The World has the rare characteristic of having the same gematria in the two main large-number ciphers:

43 and 99…those are familiar numbers…

Songs From The Big Chair was released on February 25th, 1985, the date written 2/25, which happens to be exactly 99 days before I was born in Milwaukee, Wisconsin

And of course, that’s not all:

The song was released on March 22nd, the date written 3/22

The English Reduction gematria of this string is interesting too:

It was the song Shout that I chose for the lip sync.