The accusations of attempted rape were made public on September 16th, which is 21 weeks, 2 days before Kavanaugh’s 54th birthday:

Kavanaugh’s name has gematria of 1331 in multiple methods. See how that and more of his numerology reflects that of a total solar eclipse.

Ford’s allegations against him surfaced a span of exactly 56 weeks after the 2017 Great American total solar eclipse:

In Hebrew gematria, total eclipse has a value of 227 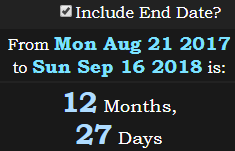 They have more matching numbers:

September 16th is written internationally as 16/9

Her date of birth is missing, but she was born in ’67

Remember, 113 is the mainstream’s favorite number of deception:

The headline had gematria of 444

It’s the 33rd degree of Masonry that is supposedly the highest.