San Bernardino was home to one of the largest mass shootings in U.S. history. On December 2nd, 2015, a Pakistani couple is said to have shot up the Inland Regional Medical Center, killing 14 and wounding 22 others.

As you will see, this ritual pays tribute to the Sun, the Moon, and Saturn, perhaps the three most significant celestial objects in the sky.

Since then, there’s been one other mass casualty incident in San Bernardino. In April of 2017, a man entered North Park Elementary School and shot his wife, a teacher, also killing a student before turning the gun on himself. That incident was a span of exactly 73 weeks, or 511 days ago:

The shooting occurred overnight when it was already September 3rd on the east coast, the date it’s making national headlines. That date is written here as 9/3

It’s said the victims were playing a game of dice

The sun is said to be 93 million miles away

The Mayor of San Bernardino is R. Carey Davis. On the date of the apartment shooting (end date), and today, he’s exactly 54 months into his term in office: 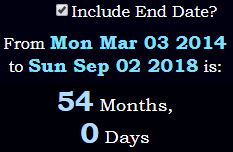 There are 235 lunar phases in the Metonic cycle.
(I’m unable to find R. Carey Davis’s birthday)

Initial reports said 10 were shot. It has since been dropped to 8. Now you know why…

Meanwhile, the Governor of California is octogenarian Jerry Brown. He was exactly 92 months into his second term as Governor on the date of the shooting on the night of 9/2

He was 217 days before his next birthday:

San Bernardino, California has interesting gematria for these types of rituals: