Robin Leach, whose full name is Robin Douglas Leach, has died at age 76

His co-host for the final 2 seasons, Shari Belafonte, is 63 years old

The date of his death, August 24th, is the day leaving 129 days left in the year. Fitting for a man known as the host of Lifestyles of the Rich and Famous

I ran some numbers on this guy in relation to his television show and noticed something really interesting. When the show first premiered, Leach had just turned 2222 weeks old, or 15555 days:

So I figured it was likely 222 and/or 555 would be in the show’s gematria. Sure enough:

In our alternate Reduction method, Septenary, the name of the show sums to 119

The show’s series finale aired a span of 156 days after the 11th anniversary of its premiere:

When the show ended, there were two hosts – Shari Belafonte joined Robin Leach beginning in 1994. Their birthdays are separated by 156 months

The number 33 sums to 156 Ordinal. See how these numbers are sacrifice codes 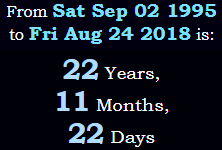 The fact that the show lasted 11 years is actually significant here. We know 11, like 22, is a master number and master numbers are coded more frequently than others. For instance, look how long it was from the Series Finale to Leach’s death – 22y 11m 22d.

But consider the date numerology of the show’s 11th anniversary.

The 11th Prime number is 31. It was also March 31st.
In the Prime number cipher, adding the names of the show’s hosts at the time sums to 1131

Today has reduced numerology of 25, a number that Leach shared with death in Reverse Reduction:

The 25th prime number is 97, matching his full birth numerology:

He died in Las Vegas, Nevada on a date with a life lesson number of 43

The word killing has Sumerian gematria of 444, just like Robin in Trigonal:

The next total solar eclipse is on July 2nd, 2019. Measuring from the date of his death, to the date of that event:

The date of his death has 70 numerology, syncing up with total eclipse

In English gematria, Robin sums to 211, the 47th prime number:

For some reason, I thought to check out Robin Thicke, since he’s been in the news lately for his girlfriend’s miscarriage. Thicke was born on 3/10/77