Today has a life lesson number of 42

This man in Arizona even got off the freeway on Arizona Avenue.

Notice it says he was traveling the wrong way from McQueen 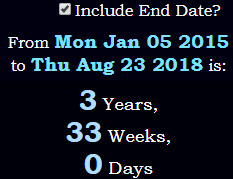 The Governor of Arizona is Doug Ducey. Measuring from the date he took office in January of 2015 gives us a span of exactly 33 weeks after the 3rd anniversary:

13 and 33 are often paired together in media hoaxes, as I have long been documenting. The 13th triangular number is 910, matching the quote from the police above: