Former WWE wrestler Jim “The Anvil” Neidhart has passed away. This death appears to be related to the career of his daughter, Natalya Neidhart, who currently wrestles on the WWE SmackDown brand. She’s a former winner of both the Divas and SmackDown Women’s Championships.

The name Neidhart sums to 79 in Ordinal, just like the word murder

Jim passed away a span of 79 days after his daughter’s birthday:

If we convert the measurement to include months, we find it was a span of 2 months, 18 days: 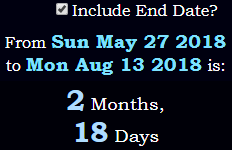 In the Reverse order, Death sums to 1807. It’s possible this is part of the reason 187 is considered slang for the homicide code

Including the end date, Neidhart died a span of 187 days after his birthday:

Not including the end date, this is 186 days, lining up with Neidhart’s Reverse gematria:

The date he died had numerology of 59

During his time in the WWE, Neidhart was a member of The Hart Foundation. Neidhart is not related to the Hart family by blood. He married Elizabeth Hart, sister of the clan. I always thought it was an interesting “coincidence” that his name ended in hart when he wasn’t even technically related.

Neidhart battled alongside family members Bret Hart, the British Bulldog, and Owen Hart. The only man still alive from that group is now Bret. There is certainly a significant amount of numerology in these deaths. Consider that Owen Hart and David Smith (aka The British Bulldog), the first two to pass away, died 1091 days apart.

Owen died in a tragic “accident” by the numbers in 1999. I discuss that death throughout this video. Jim Neidhart died exactly 7022 days after Owen:

He also died a span of 2 months, 27 days after the anniversary of the death of the British Bulldog, who died on the date leaving 227 days in the year: 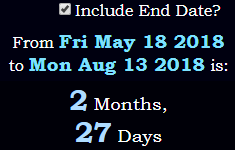 227 is a number commonly stamped into numeric rituals.

Neidhart appears to have died in the middle of the night while adjusting the thermostat. Is it possible he was murdered? Is it possible he didn’t even really die, and that the Hart clan are really a group of oathkeepers? I don’t have the answers, truth-seeker…but we can rest assured that something very smelly is going on.