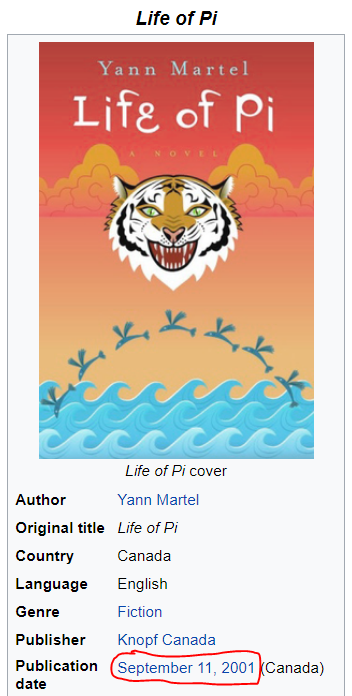 Think about the big news story from the end of the week – a man stole an airplane from Seattle-Tacoma Airport before crashing in it and dying. His name was Richard Russell.

Today, NASA launched the Parker Probe into orbit around the sun.

Richard Parker is the name of the Tiger in the film Life of Pi, which was published on September 11, 2001, the same day as the worst terror attack in United States history. The parallels between 9/11 and the Richard Russell story are easy to draw.

After the 9/11 attacks in 2001, the New York Yankees defeated the Seattle Mariners, who won 116 games (an upside-down 9/11), to advance to the World Series. Before the Mariners, Seattle had a baseball team named the Pilots for one year in ’69

The date of the plane crash outside of Seattle was August 10th, written 8/10, almost exactly 810 months after the Governor of Washington was born.
Strangely enough, this matches the Jewish gematria of the lead character of Life of Pi:

In the Reverse order, Pi sums to 29

Richard Russell is said to have been 29 years old. His nickname was Beebo and he crashed on Ketron Island:

From that date to the Seattle incident is 202 months, 3 days:

September 11th was an eclipse ritual

713 is a significant number to this code as well.

Measuring from the film release of Life of Pi to the date of the Washington plane crash:

Mass Shooting in Moss Side Neighborhood of Manchester
Police Brutality in Baltimore, Maryland