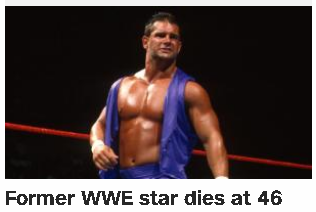 On my Podcast yesterday, I mentioned how the number 173 is significant to the crucifixion code. See Zenith of the Alpha’s videos on this topic for a more thorough understanding. Essentially, Jesus yells “ELI“, or “ELOI” in another Gospel, while dying on the cross. This is a cry out for God.

Last month, rapper XXXTentacion was killed on a date on which I predicted we’d see a major crucifixion ritual.

In my most recent post, I mentioned how today’s Google Doodle, Maria L. de Hernández, died at 1073 months old. Just two days ago, there was a Google Doodle for Lyudmila Rudenko

Today, we get news of the death of Brian Christopher, son of WWE Hall of Famer Jerry Lawler. He was in his 17003rd day alive:

This is spooky – his dad, Jerry “The King” Lawler, has matching gematria with today’s Google Doodle:

His son’s full name has an interesting prime number relationship to his own:

The crucifixion code, of course, comes from the story of Jesus

Although he went by the name Brian Christopher in wrestling, his real name was Brian Lawler

The dates of his birth and death both had 74 numerology:

Today is 123 days before his dad Jerry Lawler’s birthday:

Christopher won the WWE Tag Team Championship for the first time on May 29th, 2000. Measuring from that date to the date of his death:

His full name sums to 254, like Saturn, the Keeper of Time

Including the end date, it’s 23 weeks, 5 days before his next birthday:

In the alphabetic Order, Saturn sums to 93, as does Brian Christopher in Reduction:

The date he died leaves 155 days in the year:

Brian Lawler has double gematria of 115, just like the word killing

His full name has Reduction gematria of 119

He died a span of 11 months, 9 days after the Great American eclipse:

This is also a span of exactly 49 weeks. His dad Jerry was born in the year ’49

His name also has some alignments with sacrifice

In Jewish gematria, it sums to 6102
612 has been a very significant number this year, and really, it always has been.

Lawler was born in, and died in, Memphis, Tennessee