Minnesota Vikings offensive line coach Anthony Sparano passed away today at the age of 56. It’s a date with 49 numerology, and is 49 days before the start of the season, when the Vikings play the 49ers

49 factors to 7×7. Anthony Sparano has died 77 days before his upcoming birthday, which would have been October 7th.

It’s worth noting that this death, which falls on the 203rd day of the year, may be related to Super Bowl 53, which is played on 2/03. Sparano’s death comes a span of 197 days before that game:.

This matches the gematria of Anthony Sparano. Later, I’ll cover the related outburst St. Louis Cardinals player Matt Carpenter had against the Cubs

This death was immediately intriguing even before looking at the numbers because of the similarity between his name and former HBO character Tony Soprano, played by James Gandolfini. So just like the case of Jim “Kamala” Harris and Kamala Harris, it’s logical to think there may be connections between the deaths of Sparano and Soprano, who share Jewish and Extended gematria values:

Sparano died on a date with 67 numerology 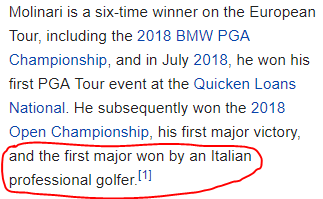 I find this all pretty interesting in light of the fact that The Sopranos was about the life of an Italian mob boss. Today, July 22nd, marked the first time a golfer from Italy has ever won a major championship in the PGA.

His name is Francesco Molinari

Molinari was 15 weeks, 4 days before his upcoming birthday:

His win was the first for Italy on the U.S. PGA Tour in 71 years

Consider how I often talk about the number 33 in relation to sacrifice. It’s the age at which Jesus was crucified under an eclipse

Anthony Sparano died 33 days after the anniversary of the death of the man who played Tony Soprano:

The man who played Soprano died in 2013

I ran the numbers on Sparano’s full name a couple of different times and noticed I got different results. I thought, how could this be? It turns out someone had edited Wikipedia to show the last name Soprano instead of Sparano, as shown in the below screenshot:

I also noticed someone change the picture at one point to show Gandolfini in his role as Soprano:

The name edit lasted about 10 minutes. The picture didn’t last more than one or two. Was this the result of some rogue Internet troll with a twisted sense of humor? Or might there be more to it?

Consider the gematria of Tony Sparano’s full name when the name Soprano is substituted in:

This was the first number that stuck out to me because on Friday, there was a baseball game that finished with the score of 18-5, which is not only a really high score, but also a significant number. “Mathematics” = 185 (RO), “Saturn” = 185 (Franc Baconis)

So could these events be related? Possibly. Consider that the star of the game, Matt Carpenter, was all the talk after he went 5-for-5 with three home runs.

Matt Carpenter was exactly 34 weeks after his birthday on the date Tony Sparano died:

The Super Bowl will be played on the 34th day of the year:

On this same date, he was also 18 weeks, 1 day before his next birthday:

Anthony Sparano, along with his full name, both have 181 gematria:

The 13th prime number is 41
Francesco Molinari was exactly 1341 weeks old on the date of his PGA win:

Again, with the intentional misspelling, the coach’s full name has some interesting related numbers in the Satanic methods:

He died on July 22nd, written internationally as 22/7

Duck Boat Accident Kills 17 in Missouri
Was There a False Flag at a 2012 EDM Show?