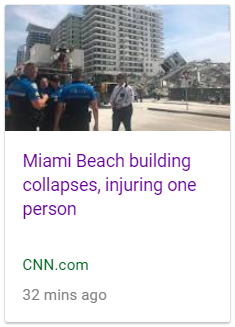 Another collapse in the city of Miami. Back in March, a pedestrian bridge collapsed, killing several people. I documented how that event occurred by the numbers.

In that post, I mention how Miami has similar gematria to the number 13, which is the primary ritual code.

In my post on the bridge collapse, I mentioned how it was related to the Golden Gate Bridge’s anniversary. This building collapse falls 10 weeks, 3 days after that anniversary.

13 is stamp of Masonic activity. So is the number 33, which is in the gematria of this community, Miami Beach

And there’s another pretty interesting alignment:

The building was on Collins Avenue

This building that came down is called the Marlborough House

CNN says they don’t know why it collapsed, but then they give us a quote, “Watch it come down”, that gives us a clue:

In the Reverse order, this phrase sums to 229

229 is the 50th prime number, matching the date numerology of the collapse:

Was There a False Flag at a 2012 EDM Show?
Toronto Shooting Leaves 2 Dead, 13 Injured