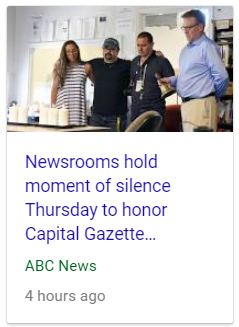 Last week Thursday, five people were said to have been killed at the offices of Capital Gazette newspaper in Annapolis, Maryland.

As usual, the name of the city matches the date numerology on which the shooting occurred.

This appears to be America’s version of the Charlie Hebdo shooting.

The Charlie Hebdo shooting began at 11:30 am:

The full name of the shooter in the Capital Gazette incident sums to 113, the mainstream media’s favorite number of deception:

The shooter is 38 years old.

As I have been consistently documenting in all false flag mass shootings, they all occur on a date that measures up to when the governor of the state took office. Naturally, this applies here as well.

Larry Hogan was born in the year ’56

The 56th prime number is 263, matching up with the name of the newspaper at which the shooting occurred:

And just to cement this connection….

This shooting took place on the 179th day of the year:

It fell just one day after governor Larry Hogan celebrated 179 weeks in office.

179 weeks is also 41 months. It’s also been over 41 months since the Charlie Hebdo shooting

41 is the 13th prime number, and 13 is the primary ritual code. The shooting happened to fall 1 month, 3 days after Larry Hogan’s birthday.

It was also 158 days after his 3rd anniversary of being sworn in as governor:

Larry Hogan’s full name syncs up with the full name of the Scottish Rite.

In the Reverse order, his name matches the Reduction value of the state he governs.

So isn’t the gematria of the shooter’s name interesting…

This shooting comes literally one day after asshat shill Milo Yiannopoulos Tweeted that he “can’t wait for vigilante squads to start gunning journalists down on sight”. Speaking of strange coincidences…the names of the victim add up to 1028 in Reverse Ordinal, much like how Maryland sums to 128 in the same method. This is a number found in the gematria of Kill

Maybe this really is a coincidence, but I found it interesting that Wikipedia made a point to mention The Capital went from being an evening newspaper to a morning one on March 9th, 2015. That’s a span of 1208 days before the shooting: