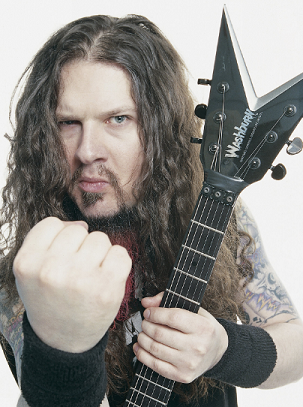 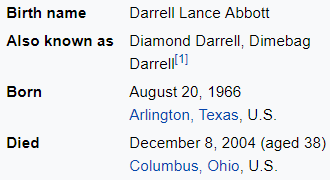 He was shot and killed at Alrosa Villa Nightclub in Columbus, Ohio. As this post progresses, we will see how this was a ritual in relation to total lunar eclipses

In Reduction, the number sixty-six has a value of 41

41 is the 13th prime number. Dimebag’s real common name has 130 gematria, as does his other nickname, Diamond Darrell

In numerology, 130 reflects a 13. He was born in Arlington, Texas, a city which has matching Jewish gematria with thirteen

When he was killed, he was playing with his new band, Damageplan

In the alphabetic order, Dimebag Darrell sums to 111
In English Extended, you get the value of 318

Including the end date, Darrell died a span of 111 days after his birthday. This converts to 3 months, 18 days:

His death also fell a span of 1 month, 11 days after the most recent total lunar eclipse and 1 year, 111 days before the next total solar eclipse.

Not including the end date, it was 110 days after his birthday. It was also 1 month, 10 days after the lunar eclipse

Appropriate, since he was born in Arlington and died in Columbus

318 is a significant number – it’s the number of times the second coming of Christ is mentioned in the New Testament. As with most celebrity death rituals, there is a “Jesus” riddle here.

See why 33 is such a significant number in death rituals. It’s the age at which Jesus was crucified. The show Darrell was shot at was a span of 303 days after the band’s only album release date:

210 is also the English gematria of Moon

This is interesting because in this same cipher, Dimebag Darrell’s full name sums to 804, which is the Jewish gematria of total lunar eclipse

Darrell died a span of 256 days before his upcoming 39th birthday:

In Reduction, lunar eclipse sums to 54. In the same year he died in Columbus, Ohio, there was a total lunar eclipse on the date May 4th, written 5/4

Measuring from that eclipse to the date he died gives us 218 days:

The 74th prime number is 353, matching he name of the shooter:

Measuring instead to the next total lunar eclipse, which wasn’t until March of 2007, we get 2 years, 2 months, 23 days:

This is very similar to the Hebrew gematria of The Moon, which is 223, the number of synodic months in the Saros cycle. It also matches the name of the nightclub when Reversed:

And whaddaya know? The name of the shooter sums to 223 in Jewish:

His name sums to 187, the homicide code, in the Reverse order:

In the standard order, his name sums to 83 like murder, also like the Reduced gematria of the nightclub:

666 is a pretty interesting number to share between the murderer and the victim. It’s a number closely-related to 33

He died a span of 15 weeks, 6 days after his birthday, matching his common name’s ALW and KFW gematria:

This event is so insanely coded, it’s hard to believe it’s real. But then again, we’re living in The Matrix

There is a bit of an Illuminati theme here as well. Recall how Dimebag died at the age of 13,990 days old. The Bavarian Illuminati was founded with 13 families on a date with 99 numerology.

In the Reverse order, The Bavarian Illuminati sums to 346, matching the venue and location of the nightclub he died in:

If you add up the gematria of his two common nicknames, you get the same value as ritual sacrifice

When you combine his job with his name, which I’ve found to be remarkably significant, you get a Jewish value of 113, syncing up with his full birth numerology.

This is more information pointing at some sort of hoax. Also consider he died 31 weeks, 1 day after that special May 4th lunar eclipse:

The show was part of the Devastation Across the Nation tour

His brother Vinnie Paul was born on 3/11 and would die 3 months, 11 days after his birthday.

Vinnie Paul’s full name sums to 197, and he died 197 days after the anniversary of Dimebag’s death. This is a number closely-associated with the Moon’s Metonic cycle.

In the Metonic cycle, there are 19 years and 235 lunar phases