Can’t help but take a small helping of pleasure with a negative story about someone named Netanyahu. This time, it’s Sara, wife of Prime Minister Benjamin.

Ha! I love it when elitists use ignorance as an excuse when it comes to breaking the law. The average citizen doesn’t get to avoid jail time if they’re caught with cocaine but say they didn’t know it was illegal. World leaders should be held to an even higher standard. If they can’t even put the right people in office to order food, what CAN they do right?! 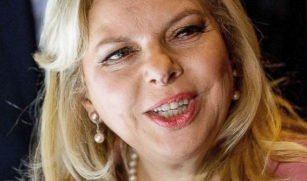 It’s funny how some of these world leaders have no interest in beautiful women.

There’s a span of 3303 days between hers and her husband’s birthday.

She was also 7 months, 2 weeks, 2 days after her birthday.

She’s got some good numbers to be the wife of Benjamin Netanyahu.

Her birthday, November 5th, is written 5/11 in most parts of the world.

Saturn is the keeper of time, and it’s closely-connected to the Moon. In Greek Isopsephy, The Moon sums to 309

Sara was born on the 309th day of the year, on a date with a life lesson number of 39

Today is a span of 39 days after May 14th, which is the date Israel became a nation: