This shooting occurred on a date with 32 numerology  in Kansas City, Kansas.

The date also had 59 full numerology, lining up with the Jewish gematria of kill

The date June 15th is written internationally as 15/06. This story is about the death of Deputy Patrick Rohrer

With the name of the state included, Kansas City, Kansas sums to 43 in Reduction

The 43rd prime number is 191, matching the name of the victim:

In the Reverse order, Society of Jesus sums to 187, which matches the Ordinal gematria of the city.

187 is a perfect number for a story about a 187 on a muthafuckin’ cop (this author does not condone violence).

187 is an extremely-significant number. It’s the number of chapters in the Torah, the first five books of the Bible. I believe this has something to do with 187’s unique property in that it’s the only number to have the exact same digits in its prime factorization and its prime relationship.

According to the local news, police were first called at 11:17

The date of the murder at the Courthouse fell 3 months, 12 days before the founding date of the Society of Jesus:

This means it was a span of 262 days after the Society’s anniversary:

This also equates to a span of 8 months, 20 days 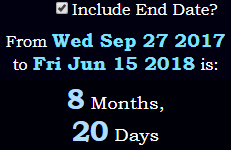 Also interesting is that the date of the Society’s founding, 9/27, is also found in his name gematria:

The Society of Jesus is also known as the Jesuit Order. Perhaps this is why the story originates at a Kansas City courthouse

Pope Francis is the current Pope, and the first Jesuit to hold the position. On the date of this murder, he was 81 years, 180 days old. Recall how Anthony Bourdain’s show was on the air for 1881 days before the date he died, which fell 18810 days after the Batman episode his death was scripted in relation to.

His last name also has the 303 code

Is it a real sacrifice? The CNN article makes it a point to say the shooting was at 11:30, despite the local news report saying it was about 15 minutes earlier.

I don’t actually think I’ve ever mentioned 923, but this is a highly-significant number to the Catholic Church. Recall how Pope Francis first visited Philadelphia on his 923rd day as Pope, then went to the White House at 9:23 on 9/23. The Philadelphia train wreck from 2015 was at 9:23…there’s a bunch more to this.

The Vatican, home of the Catholic Church, gained its independence on 2/11