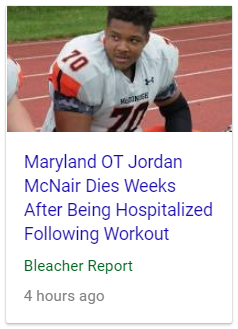 Back on May 29th, I made this post about former Maryland Terrapins basketball player Cliff Tucker, who died in a traffic collision the day before.

On the same date I made that post, a football player for the same school collapsed during a workout, forcing hospitalization. Earlier today, he passed away.

I will explain how this man died by the numbers of the Moon. To begin with, he was 19 years old. The Moon’s most significant cycle of time is the 19-year Metonic cycle. This cycle also has 235 lunar phases, so I find it interesting that despite being listed at 325 pounds, which is how big most D1 offensive linemen are, this article made an odd mistake and listed him at 235 pounds. 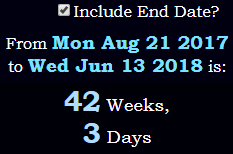 Not including the end date, but measuring instead to the second Great American total eclipse in 2024, we get 303 weeks, 5 days:

McNair was from Randallsltown, Maryland

McNair first committed to Maryland on April 16th, 2016. Measuring from that date, to the date of his death, gives us a span of 2 years, 8 weeks, 3 days: 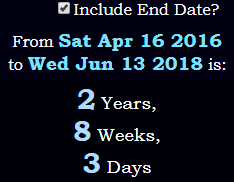 He passed away 15 days after he initially collapsed.

In English Ordinal, Moon sums to 57. The Moon ranges 28.5 degrees north and south of the ecliptic, totaling 57 degrees. Jordan McNair also has this value in Reduction, and he has died on a date with 57 numerology.

The date also has 48 numerology

Of course, it’s the Moon that covers the sun during an Eclipse. This has matching gematria with both Jordan McNair and his team, the Terrapins

In Hebrew, total eclipse sums to 227, which matches the name of the high school he attended, McDonogh School, in Reverse:

The team’s nickname was the Eagles

I would imagine there’s more clarity to this riddle, but I’m unable to find his date of birth.